So what if you're over 40. Cosplay anyway!

I started this blog to promote cosplay for those of us who are getting a bit older but still love creating fun costumes and dressing up as a favorite character. I was introduced to cosplay (outside of Halloween) when, at the last minute, I was given complimentary passes to Comic-Con International, 2011. I wanted to dress up so I quickly created a simple woodland fairy themed costume with a party dress from Ross and other bits I had at home. It wasn't really fancy, but it was fun to dress up. Comic-Con was amazing, and the costumes some of the attendees made were phenomenal. The whole thing made me wish for more opportunities to dress up and have fun.
I didn't have to wait long. That fall my friends and I got tickets to the Rocky Horror Picture Show at the Globe Theater in Balboa Park, San Diego. We decided to dress up, and I decided to go as Magenta. For my costume I used witches costume and a man's dress shirt from Goodwill that I cut up and repurposed. I was pretty happy at how it turned out.


Dressing up for Rocky Horror was so much fun, and it reminded me of all the midnight trips to the movie theater with toilet paper, newspaper, toast, rice and all the other stuff we dragged to midnight showings in the 70's.

Once I was bitten by the bug I could hardly wait for more cosplay opportunities. For Comic-Con 2012 I planned for Victorian Steampunk, a sort of Gothic Lolita Hello Kitty, and Breakfast Princess from Adventure Time.


I spent weeks on Breakfast Princess, and I think the costume turned out fantastic. I also made the Flame Princess costume for my daughter, Sarah. We had the most fun the day we dressed up as Adventure Time characters, because we got to interact with kids. Bubble Gum Princess won the popularity contest with the kids, and it was lots of fun.

Earlier this year I went with two friends to the Gaslight Gathering in San Diego. It was very steampunk and I again made trips to the thrift shop to find bits for a costume. I also found an old leather jacket that I turned into a great steampunk vest. Steampunk is fun because you can use all kinds of old stuff and found objects to create a look.

Shortly before Comic-Con this year we found out we had to move, so I had to apartment hunt, pack, move, and prepare for my daughter's visit within weeks of the Con.  My daughter told me she was going to be Poison Ivy, so I chose Harley Quinn Arkham Asylum because I didn't have time to sew a traditional harlequin style costume. My costume was very last minute, and I made it mostly from finds at thrift stores. I ordered the corset online, and I created a pattern for and sewed the boot covers, myself. Overall I was pretty satisfied with the result (I finished it just a few minutes before we left the house). The only bummer was the boot covers, which looked great until I had them on for a while. I couldn't get purple and red pleather at the last minute, so I put fabric under clear vinyl. I didn't think to put holes in the vinyl, so the boots steamed up. It was a serious costume fail and a lesson learned.

As you can see, I'm definitely older than everyone else in the pictures. In fact, I'm 56, and nobody else I was photographed with is over 35.

Last year after SDCC I read a blog where the guy showed pictures of older cosplayers who he dissed and made fun of. It really rankled because it hadn't occurred to me at the time that I was too old to cosplay. Wasn't this about having fun? Did it really matter if you didn't look exactly like the character you were portraying?

Okay, so maybe this year I was the oldest and saggiest Harley Quinn at the Con, but that was only on the outside. Underneath the lukewarm grandma exterior was a smokin' hot 19-year-old playing a fabulous comic book character. As unrealistic as that may seem, it is how many of us internally think of ourselves as we get older. The inside image doesn't reconcile with the scary person staring back in the mirror.

I may be getting older, but I'm not willing to stop having fun just because my body is betraying me. I don't want to be old on the inside just because I'm getting older on the outside. And that's what made me so angry about the blog where the guy made fun of older cosplayers.

Are you an older person who loves cosplay and still wants to participate?  Let's connect. I'm looking for guests who want to write about their "senior" cosplay experiences. 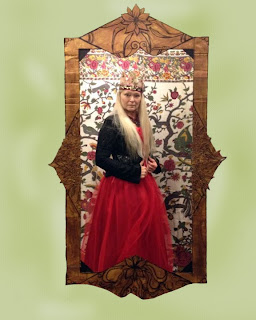